Find out why Arusha is the safari capital of Africa.

Arusha town is the gateway to Tanzania's fabulous 'Northern Safari Circuit', and the historic Arusha Hotel, in the city center since 1894 - is often where your Tanzania Safari Tour will begin.

Arusha is a major starting point for safaris heading to the Ngorongoro Crater and Olduvai Gorge, the Serengeti, Mount Kilimanjaro and Mount Meru, Lake Manyara and Tarangire. Arusha also has its own small, easily accessible Arusha National Park, which lies between the major peaks of Mt. Kilimanjaro and Mt. Meru.

Tanzania has a number of the most iconic African safari destinations, with names such as Serengeti, Ngorongoro and Kilimanjaro known around the world. Added to this are Lake Manyara and Tarangire National Park and you have the greatest safari destination on earth. The binding of this famous northern Tanzania safari circuit is Arusha.

The majority of Tanzania safari operators plying the northern safari circuit are based in Arusha. Superbly located to service these areas Arusha has grown to become one of the most important settlements in East Africa.

Arusha is located on the southern slopes of Mount Meru and lies on the edge of the eastern branch of the Great Rift Valley.  The scenery around Arusha is dominated by two impressive mountains, which seemingly rise out of nowhere.

Mt. Kilimanjaro is Africa's highest and grandest with glacial sides and a snow-capped peak, while Mt. Meru is a smaller cousin - still of great standing at 4,566m (14,990ft)- which can be summited in a couple of days. Both are dormant volcanoes, and provide the keen hiker with the chance to reach the 'Roof of Africa' and look out over East Africa's finest safari destinations.

Situated near the equator the city is nonetheless saved from the heat and humidity of the equatorial climes by the east wind that blows off the Indian Ocean hundreds of miles away. The climate provides ideal conditions for the growing of vegetables and flowers which are exported. Coffee was an important product grown in Arusha until the fallout of a few years back.

Of Accords And Genocide

Arusha has become well known for the number of political accords that have been signed in the city. The ceding of independence by Britain to Tanzania was signed in Arusha in 1661 followed by the signing of the Arusha Declarations for Self Reliance in Tanzania in 1967.

However the city is probably best known for its link to the Rwandan Genocide after the warring factions signed the Arusha Accords in the city in 1993. The next year the United Nations Security Council opted for Arusha as the base for the Rwandan War Trials Tribunal where the perpetrators of the genocide are being tried for crimes against humanity.

Initially expected to be completed by 2010 the tribunal is thought to be behind schedule with a later completion date been looked at, a delay that bodes well for the city. The trials are open to the public and many tourists build a safari in Tanzania around a trip to the Rwandan War Trials Tribunal.

The Arusha region is renowned as the only region in the world where quality tanzanite is found and mined. Wanted by jewelers the world over Tanzanite is thought by many to be more sought after than diamonds. Found only in the foothills of Kilimanjaro tanzanite is mined by corporate mining companies.

Despite its location within reach of Africa's most iconic wildlife reserves, Arusha National Park boasts a park of its own on the outskirts of the town. Incorporating Mount Meru the park is home to a variety of wildlife including giraffe, hippo, zebra, elephants, leopard, hyena and antelopes.

Look out for the black and white colobus monkey whose long flowing mane and tail billow spectacularly as it dives through the branches. Probably the most intriguing part of the Arusha National Park is the spectacular scenery of mountains, crater and grassland.

Arusha may be considered merely the access point to the northern parks but in reality there are a number of interesting attractions in the area. Mount Meru, Tanzania's highest point after Kilimanjaro, wildlife and the intrigue of the genocide trials ensure a fascinating place. 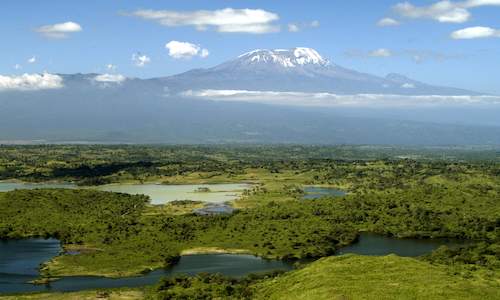 Arusha in Tanzania is the gateway to the northern circuit. Explore Arusha as well as the nearby Arusha National Park at these Arusha safari ...more
Creators of Unforgettable Memories in Africa.
©2022 Siyabona Africa (Pty)Ltd - All inclusive Holiday