From the pine forests and trout lakes of Nyanga National Park at the north end of the range to the yellowwood trees, protea shrubs and mountain pools of Chimanimani in the south, these cool heights lend themselves to gentler pursuits than the big game tracking of the hot Lowveld or the Zambezi Valley.

Golfing, horse-riding, trout-fishing and tea-sipping are the order of the day in summer while the winter months of May to September encourage fireside pursuits. Manicaland was hard hit during the war of independence and these pleasant hills were strewn with landmines. While today, the Eastern Highlands offer some of the best hiking in the country, don't stray too far off the beaten track.

Mutare is the capital of the border province of Manicaland, midway between Nyanga in the north and Chimanimani in the south. Although it is the country's fourth largest city, Mutare remains a frontier town and for tourists is mainly a departure point; either for neighbouring Mozambique or for the surrounding Bvumba mountains.

The extensive collection of aloes from Zimbabwe and Madagascar are at their best in winter. If you find your way to the Manicaland Publicity Association in the centre of town, you can't miss the park.

The distinctive cross that pierces Mutare's skyscape is a memorial to black Zimbabweans and Mozambicans who died in East Africa during World War 2. It's a short but energetic walk to the summit. Murawha's Hill is another granite kopje good for walks and views.

This reserve is a wilderness less than wild on the Mozambican-border-side of town. The viewing watering hole at Tiger's Kloof Dam is particularly crowded at evening feeding time, but then you're all but assured of seeing the resident zebras, buffaloes, antelope, giraffe and elephant.

These botanical gardens are out of town on the Penhalonga road. They are a good venue for tea and scones of an afternoon.

Forty kilometres outside on Mutare on the Penhalonga road, is another dam and watersport playground.

The Bvumba mountains that encircle Mutare overlook the Mozambican flood plains but the misty weather, indigenous rain forest and country inns resemble a little piece of rural England rather than a slice of southern Africa. There is an arts and crafts route that meanders down the farm roads offering an opportunity to taste cheese, buy hand-crafted wood and leather and enjoy the leafy scenery.The common garden crow, however, is also about. Watch out for your picnic lunch as they are not shy. Adjoining the Botanical garden is 39 hectares of unspoilt indigenous forest in the Bunga Forest Reserve. There is also a casino and world-class golf course at the Leopard Rock Hotel. This champagne pink, French chateau is not in the Alps or the Pyrenees but at the foot of the 'Hill of Tired Legs,' in the African Mountains of the Mist.The 18 hole landscaped golf course set amongst indigenous bush, has nothing to do with the name of the hill although tired golfers may find that difficult to believe. The hotel was nominated for both the Resort and Course of the Year in the Africa/Middle East Section of the Hertz 2000 International Golf Travel Awards for the second year. Zimbabwe's finest hotel also comes with the royal seal of approval. The Queen Mother, upon her visit here in 1953, declared, 'There is nowhere more beautiful in Africa.'The refurbished hotel with its marble and chandeliers , timber roof beams, period furniture, and casino's scarlet gilt and green baize ensure that the interior lives up to the exterior. In addition, horse-riding is available at Campbell Morisson farm. Bird-watching tours can be arranged and picnicking and walking are easily managed independently.

This 33, 000 hectare (80,000 acre) National Park was once the private estate of the nineteenth century imperialist Cecil Rhodes. Now, the waterfalls, pine plantations and mountain views can be enjoyed by all. The most commercial of the three Eastern Highland regions, Nyanga has trout-fishing dams, golf courses, mountain resorts and one of Zimbabwe's few casinos.An added attraction for those seeking adventure is the challenge of climbing Mount Nyangani, Zimbabwe's highest peak. While it has tempted its fair share of summit seekers, the mountain has claimed many more. The weather is treacherous and the going steep. World's View, a viewpoint easily reached by car, is an easier option.Pungwe Gorge just inside the southern boundary of Nyanga National Park is another popular viewpoint. Rafting and kayaking trips are offered between December and April on the Pungwe River. Besides fishing and boating, golfing, hiking and horse-riding, bird-watching and swimming in river pools, the ancient granite landscape has pursuits too for the mind. Long inhabited by humans, the hillsides still bear traces of Iron Age terracing and ruined walls of stone are scattered throughout the area.Z

Ziwa Archaeological site is some winding miles on bad roads from Nyanga Village but there is a museum and a guide on site to help make sense of the extensive remains of this pre-colonial settlement.Mtarazi National Park adjacent to the south of Nyanga has the second highest waterfall in Africa. However, the 762m (2,500ft) cascade is little more than a very long trickle. There is a National Parks campground next to the parking lot at the falls.

The name of both the village and the mountain, Chimanimani National Park is the southernmost section of the Eastern Highlands, 150km (90miles) south of Mutare. Less of a tourist resort than Nyanga, these 2,000m (6400 ft) peaks form a natural border with Mozambique and the only way into the park is straight up.As the park is only 7km (4miles) wide in any given direction it is easy to stumble across the border into Mozambique. Despite the lack of any amenities, you're assured of privacy, if you don't mind carrying your own tent.But, if you don't ascend into the National Park, the village of Chimanimani is set amongst magnificent mountain scenery and a nearby 18 hole golf course, horse safaris, caving expeditions or gentle country strolls will keep you occupied during the day. Bedtime comes early in these parts.Copyright © 2002 Laurianne Claase. All rights reserved. Reproduction in whole or in part without the permission of the author is prohibited. 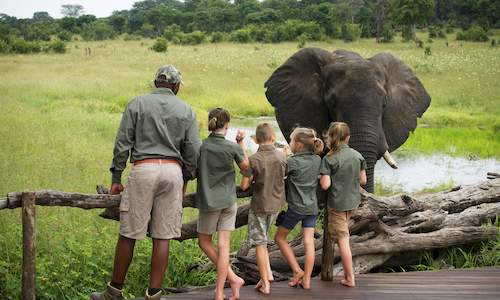 Zimbabwe safari guide - Thinking about going to Zimbabwe on holiday or safari ? Here are some reasons why you should visit Zimbabwe....more
Creators of Unforgettable Memories in Africa.
©2022 Siyabona Africa (Pty)Ltd - All inclusive Holiday