© Marleen Post
From the top of the Chain Walk, you can take a path in an easterly direction along the path that runs parallel to Victoria Falls. Here, the rainforest becomes thicker with tall trees, like the African mangosteen and climbing acacia, and much denser undergrowth.

This is where you will get wet - just how wet depends on the time of the year and the flow of water coming over the Falls.

A common creeper here is the potato creeper with its clusters of mauve and yellow flowers and scarlet berries. The first viewpoint here is Viewpoint II, which provides excellent views over Devil's Cataract and Boaruka Island and the western part of the Main Falls. Note the giant Zambezi fig (Ficus bussei) that parasitises other trees for support, eventually enveloping them all together with its criss-cross roots.

A good view of the Main Victoria Falls is from Viewpoint III, which is on a promontory that is almost always drenched in spray. Between Viewpoints III and IV, look out for animals in the bush - you may encounter bushbuck, vervet monkeys, baboons and mongooses in the undergrowth. Viewpoint IV is a favourite feeding spot for the trumpeter hornbill, which is particularly fond of the figs in the large broom-cluster fig trees (Ficus sur) growing here.

The shy and secretive bushbuck is the antelope that most favours the moist conditions of the rainforest. It is found in thick bush where the white patches on its body give it a dappled sunlight disguise.

The bushbuck is quick to take off when alarmed and can clear a two-metre fence with ease. However, there are reports of their ferocity when cornered, and bushbuck males are known to fight to the death. They are very good swimmers.

Viewpoints V and VI allow good views over Boaruka Island. Note how, on the exposed rock below the island, there are horizontal bands of aloes and grasses. These indicate the more porous sediments laid down by volcanic activity which has enabled the vegetation to get a grip on the steep slopes.

Viewpoint VII offers the best view of the Main Falls - here, regardless of the season, you will experience the awe-inspiring spectacle that has brought millions of people from around the world to Victoria Falls. The Main Falls is where most of the water passes over the Falls and you can feel the thunder through your body as air and ground reverberate with the catastrophic meeting of water and rock 100m below.

There are exceptionally tall and beautiful trees in this part of the rain forest - particularly the Natal mahogany (Trichilia emetica) and African ebony (Diospyros mespiliformis). Because the ground is permanently moist, the tall trees here have developed "buttresses" - roots that develop from the trunk in order to prevent them from falling over.

Many, in fact, do fall over, with some trees like the waterberry, the most numerous tree in the rain forest, simply sending up new trunks. The second most common tree in the rain forest is the wild date palm (Phoenix reclinata), while the third is the Transvaal red milkwood (Mimusops zeyheri). Along with the broom-cluster fig (Ficus sur), these four tree species make up 80% of the trees in the rain forest.

There was only one specimen of Scordatum and none of S guineense. What is fascinating about this study is that hybrid species cannot reproduce themselves through conventional reproduction and that all attempts to grow hybrids from seed have failed completely.

The rainforest waterberries were found, however, to be capable of reproducing themselves vegetatively - in other words, shoots off the parent plant were capable of surviving and growing if detached and planted in the soil.

It appears that the soil conditions in the rainforest enable the waterberry to bypass normal seed dispersal and reproduce by producing suckers that are initially nurtured by the parent tree before becoming independent trees in their own right.

During the rainy season look out for the colourful herb Eulophia livingstoniana, which has bright pink and purple flowers, and the ground orchard, Calanthe sylvatica, which has broad leaves and white flowers. Other colourful species found in the rainforest are the wild gentian (Chironia palustris), which has beautiful pink flowers on long stalks and the flame lily (Gloriosa superba), which has large red and yellow flowers.

One of the earliest flowering plants to emerge - ahead of the rains - is the blood lily (Scadoxus multiflorus), which is conspicuous on the rain forest floor between October and December.

The mutata or "strangler fig", one variety being the Zambezi fig (Ficus bussei), uses other trees to support it during the early stages of its growth. It eventually kills the other tree and stands on its own. A good example is the one near Viewpoint II.

The banded mongoose thrives in this environment, and groups of these small animals are often seen foraging around the tree roots for insects. Bushbuck occupy the rainforest but lie in dense bush during the day, emerging only in the late afternoon or early morning to feed in more open areas.

The rain forest is also a favoured environment of the secretive Cape file snake (Mehelya capensis), a powerful 1,5m-long constrictor that emerges only at night. It has a notable white stripe down its back and a large, flat head and aggressively preys on other snakes, lizards and frogs.

Viewpoints VIII, IX and X are opposite the Main Falls, but at the height of the rainy season, the spray reduces visibility to almost zero. During winter and spring, when there is less water in the river, you can get magnificent photographs of the Falls in all their grandeur.

These sites are all exposed to a constant updraft of wind and water from the gorge below and, as a result, there are no trees at the edge as only small bushes and grasses can survive the battering of the elements. Between Viewpoints X and XI is a small pool of water, which is full for most of the year.

Look out here for small, purple, freshwater crabs, which often fall prey to trumpeter hornbills when they venture away from the water.

There are 73 steps down Chain Walk, which has some of the best views of rainbows at the Falls. There used to be a chain here to hold on to but it has long ago been removed. The steps take the visitor down into the gorge and provide breathtaking views of the water cascading down out of the Devil's Cataract and exploding into the base of the gorge.

It is quite a sight and the sound of the experience is as good as the view. One cautionary note is that the pathway is slippery and this journey requires some physical exertion - but it is well worth it, provided you do not suffer from vertigo! 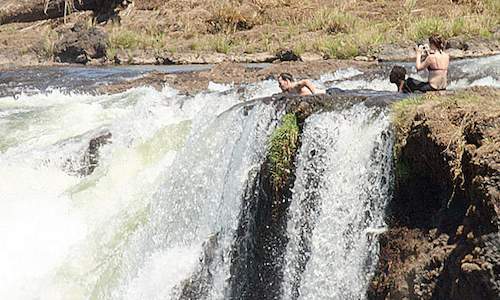 Mosi-oa-Tunya Park is a protected area on the Zambian side of the river. Covering only 66km2, it is the smallest national park in Zambia but...more
Creators of Unforgettable Memories in Africa.
©2022 Siyabona Africa (Pty)Ltd - All inclusive Holiday