© Shearwater
The Boiling Pot is the launching site of white water rafting trips. It can be accessed from the Zimbabwean or Zambian side below the Victoria Falls Bridge. The experience of the Falls from the gorge is awesome in an entirely different way from the view at the top.The two streams of the Zambezi meet below Danger Point in the Boiling Pot, a permanent whirlpool, which is a deep and treacherous fissure. This is the point where the current incarnation of the Victoria Falls was born - and the equivalent of the Devil's Cataract of the preceding falls - the one that formed Second Gorge over which the bridge has been built.Anything swept over the Falls is usually washed up on the northeast bank of the Boiling Pot. It was here that the bodies of two tourists were found in 1910. Reports from the time indicate that a Mr Orchard and Mrs Moss were in canoes a good distance upstream from the Falls when their crafts were capsized by a hippo just off Long Island. They were half-eaten by crocodiles before their bodies were washed over the Falls and recovered several days later at the Boiling Pot.

It is sinister. The black basalt walls tower above you in an intimidating fashion and the roar of the Falls is magnified by the surrounding rock. The explorer Major A de Serpa Pinto described the Boiling Pot as...

"that enormous gulf, black as is the basalt which forms it, dark and dense as the cloud which enwraps it, would have been chosen, if known in biblical times, as an image of the infernal regions, a hell of water and darkness, more terrible perhaps than the hell of fire and light".

Palm Grove is on the Zambian side of the Falls alongside Second Gorge. The pathway through the grove takes one down to the water's edge below the Boiling Pot.

Be warned: it is a steep climb back out. The cliff face above Palm Grove is host to a small stand of very rare deciduous trees, the propeller tree (Gyrocarpus americanus), which has rounded leaves and winged red-brown fruit.

Among the stone tools found in the vicinity of Victoria Falls on the Zambian bank are examples of "crescent adze blades", a type of tool found nowhere else but in the Zambezi Valley.

These thick, stone tools with a cutting edge, which date back 15 000 years, have been found near Palm Grove. It appears they were used in the construction of reed fishing traps and baskets. 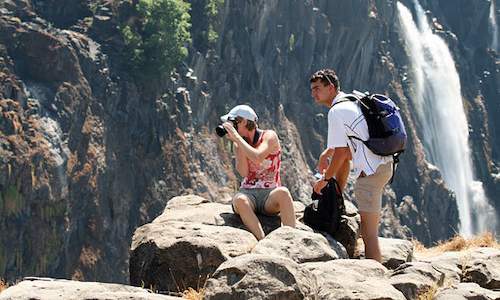 Danger Point is exactly that. An exposed, rocky promontory with low shrubs and grasses, which is often buffeted by wind. Danger Point is on ...more
Creators of Unforgettable Memories in Africa.
©2022 Siyabona Africa (Pty)Ltd - All inclusive Holiday