© African Sun
Victoria Falls Railway Bridge.
The Victoria Falls Bridge over Second Gorge has been described by writers Jan and Fiona Teede as a "hideous monument to Victorian vanity" but today it is accepted as a quaint relic of the past and an iconic part of the Victoria Falls landscape. It is also a critical link between Zimbabwe and Zambia.

The Victoria Falls Bridge is part of a rail network originally intended to link the coalfields of Hwange with the copper deposits of Zambia as part of Cecil John Rhodes's vision to link the Cape to Cairo.

It should never have been sited where it is. There was considerable opposition to what was seen as an act of vandalising the natural beauty of the area and engineers, in fact, recommended that the Zambezi be bridged about 10km upstream from Kandahar Island. However, Rhodes - who incidentally never visited Victoria Falls - was insistent that the bridge be situated where passengers could experience the Falls and feel the spray in their faces.

He was fiercely criticised by his brother Frank, who expressed his disappointment that he had failed to prevent the project and that, on its completion in 1905, all that remained to be done "was to pray for an earthquake".

The Teedes relate the story of its construction in their book African Thunder - The Victoria Falls:

"Before construction began, a rocket was fired across the gorge, carrying a string to which was attached a thin rope, then progressively heavier ropes, until a steel cable three inches (7cm) thick was in place, from which would swing the 'blondin' four-ton electric rope walker.

A 'bosun's chair' was used to avoid the alternative 12km journey from one bank to the other, and a safety net, 90m above the water, was suspended across the gorge. On first seeing the net, the entire local workforce went on strike, thinking they would be compelled to leap into it!

The construction was completed almost to the day originally planned. On the evening of 31 March 1905, the two parts were ready to be bolted together. They were six inches (15cm) too long. Was this to be an April fool? The day had been one of unbroken tropical sunshine, and the two halves of the cantilever had expanded in the heat. During the night, the wind changed, blowing spray onto the steelwork, cooling and contracting it, and allowing the closing length in the centre to be dropped in at seven o'clock the following morning."

"A party of learned scientists assembled in the middle of the bridge for the opening. There was some speculation as to its height above the water. One professor held a stone in one hand and his watch in the other with the idea that he would drop the stone and time its descent. 'Ready, steady go!' Down went the watch while he gazed foolishly at the stone in his hand."

Descent into the Gorge

Percy Clark wrote that, in 1903, he and a friend, Charles Fox, made the first recorded descent into the gorge from the southern side of the river. While they were making their way along Second Gorge, they heard an explosion followed by an avalanche of falling rocks.

The two frantically sought cover, realising that blasting operations were being carried out for the construction of the Victoria Falls Railway Bridge above. Clark spent the night in the gorge after failing to find his companion whom he presumed was dead. The next morning, wet and miserable, he climbed out of the gorge only to find Fox waiting for him at the top of the gorge with a bottle of whiskey, which they promptly shared for breakfast.

The Victoria Falls Railway Bridge was designed by Sir Ralph Freeman (who also designed the Sydney Harbour Bridge) of the company Douglas Fox and Partners and was built by the Cleveland Bridge and Engineering Company of Darlington, England. At the time, it was the highest bridge in the world, some 125m above the river. It is 198m long, with the central span measuring 152m.

The components of the bridge were constructed in England and the pieces shipped to Beira in Mozambique from where they were transported overland to Victoria Falls. There it was assembled by what a visiting hunter, J W B White, described as "the most extraordinary collection of cosmopolitan toughs I have encountered anywhere". Remarkably, only two people died while it was being built.

The Victoria Falls Bridge was also the site of an attempt to negotiate a political settlement to what was then Rhodesia, which had unilaterally declared independence from its colonial ruler, Britain. Ian Smith established a white minority government in 1965 that put it on a collision course with the rest of Africa, which was undergoing its first wave of democracy. In 1975, with the civil war under way in Rhodesia, the former Zambian President, Kenneth Kaunda, and the apartheid Prime Minister of South Africa, John Vorster, tried to persuade Smith to negotiate with moderate nationalists under Abel Muzorewa of the African National Council.

The Victoria Falls Bridge was chosen as a site for talks because it was in a "no-man's land" between the two countries and was, therefore, seen as a neutral venue. The talks, which took place in a railway carriage, came to naught, with Smith refusing to compromise on the issue of immunity from prosecution for guerilla leaders fighting against his regime.

Subsequently, the white government was forced to relinquish power through the Lancaster House talks in Britain, and Zimbabwe held democratic elections in 1980; elections which saw Robert Mugabe's Zimbabwe African National Union take power. Today, the bridge is the site of one of the highest bungee jumps in the world (111m) and an important cross-frontier tourist and freight link.

This is a "must do" activity for the thrill seeker and adrenalin junkie. It is one of the highest bungee jumps in the world, with a fall of 111m from the historic Victoria Falls Bridge over the Boiling Pot. One great advancement over bungee jumps of the past here is that you no longer have to do the arduous walk out of the gorge after the experience but you are pulled back up to the bridge. Well over 100 000 people have done the jump, and at the time of publishing, the operators have had a 100% safety record (besides the occasional sprained ankle, that is)!

Victoria Falls writers Jan and Fiona Teede documented the first bungee jumps from the bridge when a commercial licence was awarded to the Zambian operators in the early 1990s. They relate the story of an elderly Zambian man who asked the first jumpers how much they were being paid to jump.

He could not believe his ears that the jumpers were the ones who were actually paying for the death-defying leap. Soon after the bungee operations began, Chief Mukuni from Zambia arrived in full tribal regalia to experience the jump himself as a means of paying tribute to his ancestors. The entire village came to support him. "... having come thus far, the pressure on him to take the plunge was intense," wrote the Teedes. "Twice, he mounted the ledge and withdrew, ashen-faced, to safety.

The tension grew, and the crowd fell silent. At last, he gritted his teeth and toppled into the void to the accompaniment of wild cheers from the onlookers. This feat should probably afford him a place in the Guinness Book of Records as the first African chief to have 'bungeed' in the history of the sport."

Other Points of Interest 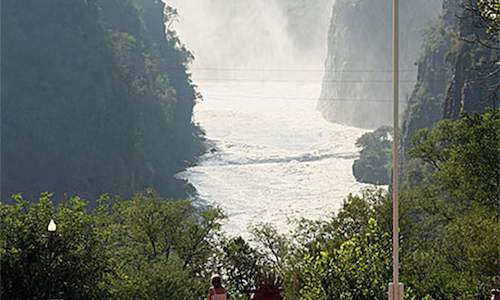 The history of Victoria Falls Bridge is more than 115 years old. Cecil John Rhodes had the original vision of linking what is now Zimbabwe t...more
Creators of Unforgettable Memories in Africa.
©2022 Siyabona Africa (Pty)Ltd - All inclusive Holiday