© Larry Norton
This magnificent curtain of water which descends into a narrow abyss between Zambia and Zimbabwe is a UNESCO Heritage Site. Victoria Falls has been a sought after destination since the late 1800's and is thought to be the largest falls in the world, one of the seven greatest wonders.

It is clear from archaeological sites around the Victoria Falls that the area has been occupied from around 3 million years ago. Stone artefacts from that time have been found as well as items from the Middle and Late Stone Age.

Stone Age inhabitants were eventually displaced by the Khoisan, who were hunter-gatherers that used iron implements. Later, Bantu people moved into the area and the Batoka tribes became dominant. Over time other tribes arrived including the Matabele and the Makololo. Descendants of these tribes are still living in the area today.

Members of the Makololo tribe were the ones who actually took the intrepid explorer David Livingstone, in dug out canoes to see the falls. Livingstone, a Scottish missionary, was on a journey to find a route to the East Coast of Africa. Between 1852 and 1856 he explored from the Upper Zambezi through to the river mouth. The falls were well known to local tribes and it was Chief Sekeletu who escorted Livingstone on 17 November 1855 to the viewing site.

The Smoke That Thunders

The local indigenous name for the falls is Mosi-oa-Tunya meaning "the smoke that thunders". Livingstone, on seeing the massive waterfall named it after the British Monarch at the time, Queen Victoria. Later he recorded in his journal these famous words:

'No one can imagine the beauty of the view from anything witnessed in England. It had never been seen before by European eyes; but scenes so lovely must have been gazed upon by angels in their flight".

David Livingstone became the first European to see Victoria Falls. He returned again in 1860 for a more comprehensive study and was accompanied by John Kirk, a fellow explorer. Other European visitors that followed included a Portuguese explorer, and Emil Holub a Czech explorer who made the first detailed plan of the area, also British artist Thomas Baines who painted some of the earliest pictures of the falls.

Once word got out, Anglo traders started to arrive in increasing numbers and a rustic settlement was built on the riverbank (now Zambia) called Old Drift, the crossing place for the Zambezi River prior to 1905.

Visitors from what was the Transvaal region of South Africa began to make their way by ox wagon, on horseback or on foot, to see Victoria Falls. However, malaria was a serious problem in Old Drift causing the settlement to be relocated to its present site, now the town of Livingstone, Zambia.

Victoria Falls really came into its own when Cecil John Rhodes, a politician and entrepreneur commissioned the building of the now famous landmark Victoria Falls Bridge, to cross the Zambezi River. The Victoria Falls bridge was completed in 1905 and became a major transport route for road and rail traffic, trade and enterprise in Africa.

Visitor numbers to Victoria Falls increased steadily over the decades with 300 000 people visiting the falls annually by the 1990's. By that time, Victoria Falls was an established adventure holiday destination, a trend that continued to grow during the early 2000's with the town of Livingstone, Zambia rising to the occasion.

This colonial town is now experiencing a revival of interest and business, with hotels, lodges and tour operators becoming established in a very short space of time to meet demand.

The towns of Victoria Falls, Zimbabwe and Livingstone, Zambia stand on either side of the mile wide waterfall and the mighty Zambezi River. This shared heritage offers the ideal destination for romance, weddings and honeymoons, fabulous Big Five safaris and wildlife viewing. A huge variety of adrenalin sports take full advantage of the spectacular environment. Other unforgettable adventures include flights over the falls, horse trails, canoeing, fishing and cruising.

The Discovery of Victoria Falls 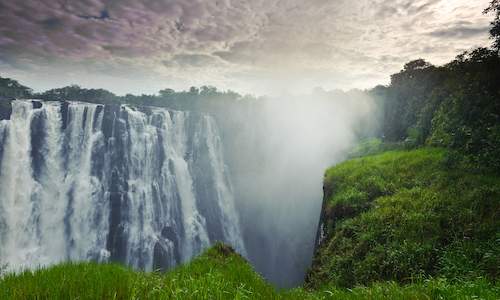 It is a commonly perpetuated fiction that the great Victoria Falls waterfall was first discovered by David Livingstone in 1855. In all likel...more
Creators of Unforgettable Memories in Africa.
©2022 Siyabona Africa (Pty)Ltd - All inclusive Holiday