© Prof. Lee Berger
Livingstone Island and Rainbow Falls can best be seen from Viewpoint XI on the Zimbabwean side of Victoria Falls during the dry season - the spray is usually too dense to offer anything other than intermittent views during the rainy season.

It is possible to walk onto Livingstone Island from the Zambian side when the river level is low. It was from this island that David Livingstone first saw the Falls in 1855 when he was paddled downstream by his local guides.

Livingstone first measured the height of the Falls from Livingstone Island. He lay on the precipice and lowered a string weighted by some bullets held in a square of calico down over the edge. It got lodged at 90m, still some way off the bottom. Livingstone had great hopes for the island, which he named Garden Island. He planted apricot pips and coffee seeds, hoping to create a nursery. However, these were eaten by hippos.

Livingstone Island is a profoundly sacred site in local tradition. During the dry season, tourists from the Zambian side of the river can cross the low waters and experience a bush breakfast or lunch laid on by tour operators.

The rare Schalow's turaco (Tauraco schalowi), whose old name was Schalow's lourie, is remarkable in that its colour is directly related to the amount of copper in the soils of the area.

This fruit-eating bird was observed with interest by 19th century prospectors - excess copper is deposited in the pigment of the feathers, giving them a purplish tinge, thus indicating whether there are reasonable copper deposits in the surrounding area.

Schalow's turaco is very secretive, and the best chance one has of seeing the bird is the flash of red wing as it flies between the trees of the rainforest.
Illustration: Chip Snaddon

On the 16 November in 1855, Livingstone was paddled by canoe to what is now known as Livingstone's Island, on the lip of the Falls. His own words best describe his moment of discovery:

"No-one could perceive where the vast body of water went, it seemed to lose itself in the earth, the opposite lip of the fissure into which it disappeared being only eight feet distant ...

Creeping with awe to the verge, I peered down into a large rent which had been made from bank to bank of the broad Zambezi and saw that a stream of a thousand yards broad leaped down a hundred feet, and then became suddenly compressed into a space of fifteen or twenty yards ... the most wonderful sight I had witnessed in Africa".Brett Hilton-Barber and Lee R. Berger. Copyright © 2010 Prime Origins. 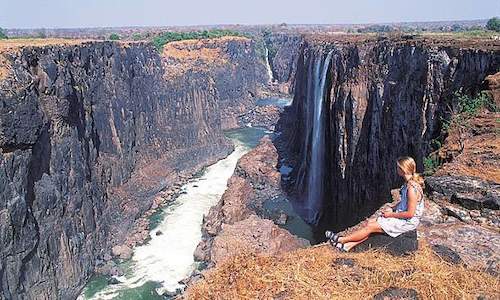 Victoria Falls Eastern Cataract with Devil's Cataract in the distance. Zimbabwe on the right and Zambia to the left. During the dry season, ...more
Creators of Unforgettable Memories in Africa.
©2022 Siyabona Africa (Pty)Ltd - All inclusive Holiday