Kenya is often referred to as the "home of the African safari" as the African safari originated in Kenya. One of the highlights of a Kenya safari tour is seeing the Great Migration, as the wildebeest move into the Masai Mara.

There are however many other superb Kenya safari destinations including national parks and game reserves. Read more below or browse our Kenya Safari Guide articles.

The Masai Mara National Reserve is home to the vast Serengeti Plains, the Big Five and the never-to-be-forgotten mass migration of Wildebeest and Zebra that happens every year. The Mara has rolling grasslands and acacia savannah, sharing the Serengeti Plains with Tanzania. The animals roam freely between the two countries in search of food. Rich with game, visitors can see Elephant, Lion, Rhino, Buffalo and Leopard as well as the beautiful Cheetah in the reserve.

Other animals include, Spotted Hyena, Black Backed Jackal, Hippo, Eland and Giraffe. In fact, the Lion population is doing so well that they are seen often and appear to be quite used to vehicles. The migration happens every year in late July / August, when millions of Wildebeest and Zebra cross the Mara River into Kenya, its a gruesome end for thousands that get taken by predators and crocodiles at the crossing. The same journey happens again in reverse during October.

The Masai Mara has reserve status so that the Maasai tribe, who have occupied the area since the 17th century, can live and continue their way of life. The proud Maasai are herdsmen and warriors, living harmoniously amongst the wildlife as pastoralists and not hunters. Visitors may see a traditional dance performed by the men at some of the Masai Mara safari lodges.

One of the lesser known Parks, although it has had its moments in the past due to the efforts of Joy and George Adamson of Born Free fame. It is a lush area, with great views and Mt Kenya in the background. Located east of Meru, the Park experiences high rainfall and has dense jungle, tall grass and swamps this does make it harder to see game but there are plenty of animals. Security has been increased in the Park after some terrible incidents of poaching before now, but it is worth checking the conditions in advance of a planned visit. Read more about Meru National Park in Kenya.

Amboseli in Kenya is the site of a magnificent view of the snow capped peaks of Kilimanjaro, this together with the image of a herd of Elephant strolling across in the foreground has been immortalised in peoples minds and draws a great many visitors who wish to capture it for themselves. Kilimanjaro is across the border in Tanzania and rises an impressive 5km (3 miles) over the plains this stunning view is best seen at sunrise and sunset.

Located 200km (124 miles) from Nairobi, the Park itself is not big, but visitors get the best opportunity of seeing Black Rhino and a huge variety of wildlife. The ideal spots to view game are at the swamps, the rest of the Park is flat and dusty - unfortunately due repeated off-road excursions by visitors the grasslands and fragile eco-system have suffered.

It is therefore in everyones interest to stay on the roads. Visitors can fly-in directly to Amboseli, or self-drive via Namanga on the A104 road, the last section of around 75km (47 miles) is uneven, but the roads are generally not bad.

This is the site of another incredible picture of life in East Africa, more than a million pink Flamingos and thousands of other birds, feeding along the shores of Lake Nakuru, a shallow soda lake. Visitors should note that conditions have to be just right for this incredible event to happen at all, otherwise the birds move on to other suitable sites, it would be best to check first.

The best vewing spot is Baboon Cliff; this gives good elevation and perspective. The Park covers about 200km (124 miles) with a variety of animals present including abundant impala, also warthog and waterbuck. This really is a bird watchers heaven, but other game animals that might be seen are Buffalo, Lion, Leopard, Black Rhino, White Rhino and also Rothschild Giraffe and Eland.

This Park was created in order to protect the moors of the Aberdare Mountains and its forested slopes. The Park is well nigh impenetrable and difficult to navigate due to muddy roads and high rainfall; only 4x4 vehicles can attempt it but not in the wet season as the Park is closed. Resident game include Elephant, Rhino, Lion, Black Leopard and a beautiful but rarely seen Bongo antelope, however the forest is dense and its difficult to view them.

The main attractions in the park are 2 up-market tree lodges; they are both raised above floodlit waterholes that have salt licks, one lodge in particular has excellent nocturnal viewing and visitors are summoned from their rooms if an unusual animal should come to the waterhole other than the Elephant, Rhino, Buffalo and Bushbuck often seen there. Transport is arranged exclusively to these lodges from the Aberdare Country Club and is the only way to get to them.

One of the largest National Parks in the world and certainly the biggest in Kenya, Tsavo has been divided in two (West and East) for ease of administration and covers altogether 21 000 square km. The Park has diverse landscapes, flora and fauna with 4 rivers and volcanic hills, 1000 plant species and 60 major mammal species. The incredible size of Tsavo has been both a blessing and a curse, with extreme poaching taking place in past years. The Park is located halfway between Nairobi and Mombasa.

Tsavo West has 4 of the Big Five game animals and a good antelope population. It is the most developed with wonderful scenery. There are rolling volcanic landscapes, also tall grass and dense bush which may obscure the game. The 2 waterholes are the main attractions; the lodges are built around them and provide excellent opportunities for game viewing.

Over the highway that separates the Parks is Tsavo East, once famous for fantastic herds of Elephants. Again, poaching has been a severe problem, but now visitors can see around 50 or more fine Elephant which have wisely retreated to areas near the lodges for protection. Great herds of Buffalo numbering up to 1000 can also be seen here.

The Park has a remote air about it, less attractive to some visitors but the best game viewing is possible along the waterways and at Kanderi swamp, another good site is the Aruba Dam for Lion spotting, both places are close to the Voi Gate.

Rising out of the Central Highlands to a height of 5 199 metres, the snow capped peak of Mount Kenya is a sight to behold. Africas 2nd highest mountain is sacred to the Kikuyu people; Mount Kenya together with the Aberdares forms The Central Highlands. The land is fertile and the climate very favourable, a pivotal factor in clashes in the past between greedy European settlers and the Kikuyu leading to the Mau Mau Rebellion.

Above the forest line, the National Park supports rainforests and bamboo thickets, higher up there is beautiful moorland of heather and giant lobelia. Buffalo, Elephant, monkeys, forest hog and antelope live in the forest. The 3 mountain peaks are popular for climbing, visitors who are quite fit can climb Point Lanana, but the other 2 are reserved for technically experienced mountaineers only. There is a good tar road running around the base of the mountain with various towns along it.

A most accessible Park, being just a few kilometres from the city, it affords some unusual features visitors can photograph Lion, Rhino, Giraffe and Wildebeest with a background of city skyscrapers, also the Park is fenced on one side only which allows the animals to move freely to neighbouring Athi Plains, even though the city is so close.

Rhino can be seen here and at least 500 bird species have been spotted. Entrance to the Park is found at the Headquarters of Kenya Wildlife Services on Langata Road, no special vehicle is required, regular cars can be taken in.

While in Nairobi visit the Elephant Orphans at the David Sheldrick Wildlife Trust. 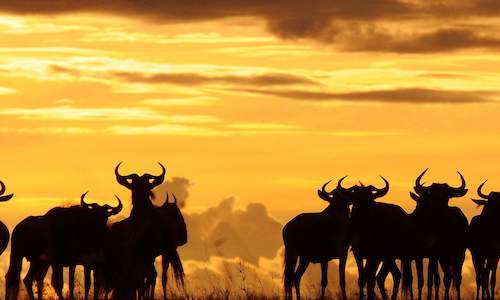