One morning in 1856, a fifteen year old Xhosa girl named Nongqawuse went with another girl to scare birds from her uncle's crops in the fields by the sea at the Gxarha river mouth in the present day Wild Coast area of South Africa.

When she returned she said that she had seen a man, who had told her that 'The whole community would rise from the dead; that all cattle now living must be slaughtered'. The girls returned home and told their families what had happened but they were not believed. Later, however, when Nongqawuse described one of the men, her uncle Mhalakaza, himself a diviner, recognised the description as that of his dead brother, and became convinced she was telling the truth.As a result, between April 1856 and June 1857, the various sections of the Xhosa people of the Eastern Cape and the Transkei slaughtered almost all their enormous stocks of cattle and deliberately killed their crops. This apocalyptic event, rather than being some kind of 'mass suicide's described by early colonial historians, was actually the earliest example of a mass 'passive resistance' movement in South Africa. The themes and symbols of the Cattle-Killing can be found in the various resistance movements of South Africa right into the modern era.Nongqawuse and Mhalakaza said that those who had appeared to them were the spirits of their dead ancestors, who had come back to life in order to bring the Xhosa nation back to its former glory  and to 'render the Xhosa the assistance they required in order to drive the white man out of the land'.A few days later Mhalakaza met with the spirits himself, and said that all the dead of the Xhosa nation would arise again, that they would come up out of the sea, bringing with them new and uncontaminated cattle, along with 'sheep, goats, dogs, fowls and every other animal that was wanted, and all clothes and everything they could wish for to eat. . .  and all kinds of things for their houses.'  The cattle, said Nongqawuse, were at present in underground caverns waiting to arise and start a new world for the purified Xhosa people. On the day of their coming, she promised, 'the blind would see, the deaf would hear, cripples would walk, and the whole Xhosa nation would arise from the dead' and begin a golden age without disease, death or misfortune.

As word of the prophecies grew, the Xhosa paramount chief, Sarhili, sent emissaries to the Gxarha river mouth to investigate the prophecies. They did not actually meet the strangers, but returned home convinced of the truth of the prophecies and immediately began killing their cattle. Sarhili then sent two of his councillors to notify the chiefs under British jurisdiction that they must sacrifice their 'bewitched' cattle. Once Sarhili had come out in support, the movement gained enormous momentum.

But not all the Xhosa killed their cattle. Many refused to believe the truth of the prophecies and refused to waste their corn and neglect their gardens. By the end of 1856, so many cattle had been killed that the adherents of the movement had gone too far to turn back. Searching for a reason why the dead had not been resurrected as the prophecies promised, they blamed the 'selfish' actions of the 'Unbelievers' in preserving their cattle.

As the Cattle-Killing frenzy swept Xhosaland, rumours flew. The most striking of these was that the 'New People' foretold by Nongqawuse were in some way connected to the Russians, against whom the British were currently fighting -and being defeated -in the Crimean War. The Russians were therefore believed to be black, and coming over the sea to liberate the Xhosa and drive the whites into the sea, whereupon a new Utopia for the nation would begin. The individual magistrates who were stationed with chiefs under Governor Grey's system tried to persuade the chiefs of the foolishness of slaughtering their cattle, but with little success.

As hunger set in, the farms of the unbelievers were plundered and rage against them mounted. Blamed for the destitution around them, and denied any help from the colonial government, they became outcasts, scarcely any better off than the Believers.

By February 1857 starvation and destitution were widespread. No definite date had as yet been set for the beginning of the New World, and so many cattle had been killed there was no sense in keeping those that remained alive.

Sarhili visited the Gxarha river mouth, and spoke with Nongqawuse and Mhalakaza for a long time. When he returned, he announced that the New World would begin in eight days. On the eighth day the sun would rise blood-red, before setting again, there would be a huge Thunderstorm, and then "The dead would arise". During the next eight days the Cattle-Killing rose to a climax. The Xhosa historian Gqoba reported that on the eighth day - " The sun rose just like any other sun. The Believers withdrew into their houses all day, fastened tightly behind their doors, peeping outside occasionally through little holes in their dwellings until the sun disappeared. . . "

The estimated figure of those who died as result of the cattle-killing stands at 40,000. In addition, the Governor of the Cape instigated a massive programme of labour 'recruitment' which led to thousands of Xhosa being transported across the border into Cape Colony. Magistrates were instructed only to give food and relief to those who were willing to be contracted for labour in the colony. Those who agreed were obliged to sign a term of agreement whereby they expressed their willingness to work anywhere in Cape Colony for any wage that was offered.

Reasons For The Xhosa Cattle Killing

So what could have possessed the Xhosa to do such a thing? To answer this question modern historians must ignore colonial theories of 'superstion' and 'delusion' as well as the long-held belief amongst the Xhosa that the prophecies were planted by the British administration in order to orchestrate the fall of the Xhosa nation. Instead one must grasp both the cultural background to the killings and the historical context in which they happened.

There is a strong place in traditional African religion of vision and prophecy, especially by girls and women. It was therefore not difficult for the Xhosa to believe in Nongqawuse and her prophecies. The place of cleansing and purification in the Xhosa religious system also played a central role in the Cattle-Killing. The cattle were to be killed because their owners had 'contaminated' them. Prior to the cattle-killing, the herds of the Xhosa had been repeatedly decimated by a disease called lung sickness, brought to South Africa by cattle imported from Europe. The Lungsickness epizootic which preceded the Cattle-Killing made it even easier for the Xhosa to believe that the cattle were 'infected' and must therefore be destroyed.

Sickness was associated in traditional culture with witchcraft and sorcery. If the cattle were dying, then the owners were at fault because they had allowed witchcraft to be practised in their community. In order to make way for Nongqawuse's vision of a New World without the hardship and oppression of the present one, the impure cattle, crops and animals had to be destroyed. Cattle sacrifice was a common way of appeasing angry ancestral spirits, which again fitted in perfectly with the message of Nongqawuse about the coming of the New People.

Although no credence is nowadays given to theories that the British administrators deliberately organised the cattle killing, some blame for it must lie with the teachings of the Christian missionaries who had been active in Xhosaland for some time.

The influx of Western religious thought on the minds of Xhosa people had been considerable, despite a relatively small number of formal conversions. Mhalakaza, the uncle of Nongqawuse and the driving force behind the Cattle-Killing movement, had been in his youth a servant to Archdeacon Nathanial Merriman of the Cape, and had been confirmed into the Anglican church. Perhaps in the mind of Mhalakaza and the Believers, the Christian concept of the resurrection took root in the idea of the ancestors rising from the dead.

According to the historian JB Peires, 'This fusion of Xhosa and Christian prophecies created an apocalyptic tradition which outlasted the Cattle-Killing and remained potent well into the twentieth century.' The talk of whites being swept into the sea that accompanied Nongqawuse's prophecies was not revolutionary in a political sense, but it did pave the way for a crossover between religious movements and political ones.The Xhosa Cattle-Killing was a very early example of a mass movement. The self-sacrifice involved in destroying the resources controlled by the ruling classes, but needed by the nation as a whole, can perhaps be connected to elements in 20th-century nationalist activity, such as bus or shop boycotts, civil disobedience or mass arrests.

This comparison with twentieth-century nationalist movements can be taken further. Although not intrinsically an anti-European movement, the Xhosa Cattle-Killing can be seen as an assertion of black identity. Steve Biko coined the slogan 'Black man, you are on your own' for his philosophy of Black Consciousness, and likewise, whites were simply ignored in the prophecies of Mhalakaza and Nongqawuse - they had no part to play in the New World of the Xhosa. Western Christian images were adapted by the Cattle-Killing prophets for their own ends and incorporated into a specifically black world picture, which also drew on the rich seam of traditional Xhosa culture and the image of an idealised past.

These factors suggest that the Cattle-Killing could be viewed as a prelude to later resistance ideologies of Africanism and Black Consciousness. As such it should be regarded not as a shameful secret in the history of the Xhosa people, but as an early form of black consciousness and resistance.Copyright © Gemma Pitcher 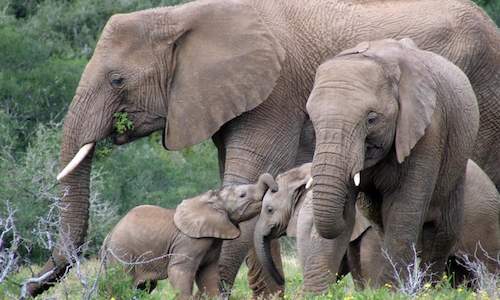 Whether you're planning an escapade in the bush or a relaxing family vacation, the Eastern Cape is the ideal Big Five safari destination in ...more
Creators of Unforgettable Memories in Africa.
©2022 Siyabona Africa (Pty)Ltd - All inclusive Holiday