From fly-fishing to traditional angling and the chance to test your skills against one of the great aquatic acrobats - the world-renowned tiger fish - fishing on the Zambezi is a must for avid anglers.A variety of operators launch from both sides of the river and boats vary from covered river yachts to open skiffs. Half-day and whole-day excursions are available. For non-fishermen, the fishing excursions are a great opportunity to see wildlife along the river and the birding is fantastic. May is traditionally the best fishing month for tiger fishing.

The Zambezi River system has about 134 fish species of which 24 (17%) are endemic. The Okavango River system is joined to the Zambezi via the Okavango Delta, the Selinda spillway and the Linyanti and Chobe Rivers.

There is geological evidence that, about 2 million years ago, the Okavango, upper Zambezi (above the Victoria Falls) and Limpopo Rivers were all joined. These factors explain why many fish species are found in all three of these systems today.

Common Fish of the Zambezi

One of Africa's most famous game fish and the species most closely associated with the Zambezi; sought by anglers because of its fierce nature - the current record from the river is a 15,5kg specimen.

The heavyweight of the Zambezi, a large, aggressive predator that will eat almost anything; found only below the Falls; the largest one caught in the Zambezi weighed an astonishing 47,6kg. The stomach contents of vundu have been found to contain baby crocodiles, snails, other fish and birds; it is known to swim near heronries hoping to prey on fledglings that may fall out of the nest.

One of the most popular angling fish in the Victoria Falls area, favouring quiet water near rocks or river banks; the largest caught was reputedly 6kg but most are about 3kg in weight. 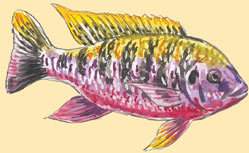 Widely distributed through the Zambezi, playing an important role in controlling the growth of aquatic plants; much smaller an other bream.

These are the true scavengers of the Zambezi and an important species in maintaining the ecological balance of the river; one of the few fish species that can share open water with the tiger fish, probably because of their formidable scales which can cut easily; disliked by fishermen, loved by cormorants. Of the five species in the river, three are found above the Falls and two below.

Usually restricted to lagoons and backwaters which offer some protection against the tiger fish; good game fish with a reputation as a fighter; the largest specimen found in the upper Zambezi was 1,4kg.

A fascinating catfish with a bloated appearance capable of generating an electrical discharge of between 350 and 450 volts; found only below the Falls; many a novice angler has received a forceful shock after being asked by their more experienced colleagues to help land the fish.

The Victoria Falls are an important barrier to fish migration and there are, therefore, differences in the fish populations above and below the Falls. Also, the Zambezi is a river of many moods and different habitats. There are high-energy rapids, open flowing sections, narrow shaded channels, quiet backwaters and stagnant pools.

These different habitats result in a distinct separation of species determined by their specific ecological preference. For example, consider two predatory fish: tiger fish prefer well-oxygenated waters and will be found in open waters or below rapids where they actively hunt their prey, while the African pike, which is more tolerant of lower oxygen levels, prefers quieter backwaters where it lies in wait to ambush its prey.

The Tiger Fish. Difficult to catch, and good to eat. Photo: David Rogers

The best Victoria Falls fishing story Have you heard the one about the eel that climbed from the bottom of Victoria Falls to the top? This is not a joke but an as yet undisputed, scientific fact. All fishermen know that the aquatic life above the Falls is completely different to that downstream.

But one amazing phenomenon is that of the African mottled eel (Anguilla bengalensis labiata). Mottled eels spend several years growing in fresh water before migrating downstream to the sea to breed. Their eggs hatch into planktonic larvae that drift on ocean currents before metamorphosing into thin, glass eels that migrate into fresh water and become elvers that migrate further upstream.

Remarkably, the glass eels and elvers are able to migrate over major barriers, such as dam walls, by adhering to the structure with surface tension and wriggling. The presence of adult eels below the Victoria Falls is evidence that these migrating young eels are able to surmount such formidable obstacles as the dam walls at Kariba and Cabora Bassa. Here comes the punch-line - there is a record of an adult eel being caught in the Zambezi River ABOVE the Falls, meaning that it had to somehow ascend the Falls without going on to dry land!