The Geology of Victoria Falls

© Vic Falls in the dry season
Victoria Falls is the most recent manifestation of at least seven older, extinct falls that were of comparable magnitude to the present-day Falls.
Photo: Les Burger

To understand the formation of the Falls, one has to look at the underlying geology and the ancient tectonic processes that shaped ancestral Africa. The main bedrock in the Victoria Falls area is basalt, a dark volcanic rock formed around 180 million years ago.

The basalt was laid down during a million-year period of gentle volcanic eruptions with each successive layer of lava covering the solidified layer before it. The basalt in the Falls area is up to 300m thick and forms a geological "island" in the surrounding sandveld.

How Was Victoria Falls Formed?

The basalt stretches some 200km from Kazangulu on the Botswana border to the Matetsi River confluence in the Batoka Gorge.

As the lava cooled down, several cracks, known as joints, emerged within the basalt, forming mostly in an east-west direction. These giant cracks deepened as Gondwanaland broke up from about 110 million years ago, and were gradually filled by soft clay-like sediments, which stood in stark contrast to the surrounding basalt.

The tectonic movements associated with the break-up of Gondwanaland created an uplift in what is now central Southern Africa, dramatically altering the old river systems and creating new ones where none had existed before.

The March Of Time
200 million years ago (mya) - desert like conditions in Victoria Falls area - no river at this point; dinosaurs roam the area
180 mya - volcanic eruptions lay down the basalt in the Victoria Falls area
150 mya - tropical vegetation replaces deserts
110 mya - break-up of Gondwanaland leads to giant cracks in the basalt, which will eventually become a sequence of waterfalls when river capture takes place
15 mya - gigantic uplift of central Zimbabwe leads to formation of giant lake at Makgadikgadi Pans - upper Zambezi at this point is part of Limpopo River system
5 mya - tectonic movements lead to big spill of Makgadikgadi lake causing the upper and lower Zambezi rivers to be linked - formation of first Victoria Falls waterfall around this time
1,5 mya - evidence of Stone Age humans in Victoria Falls area
250 000 years ago - 100 000 years ago - probable age of existing fall at Victoria Falls

The ancient Zambezi then began flowing from north to south over these cracks, the huge volume of water scooping out the soft infills, and creating curtain-like waterfalls in the huge steps in the river system.

The reason for this is to be found in the dynamics of the water flow.

The extreme east or western edges of the curtain falls appear to be typically the weak points of the system. The flow of the water will either gently erode the relatively soft infillings of the faults, or - more catastrophically - knock a boulder loose, creating a deeper channel.

As the strength of the river is concentrated on this "nick" or weak point, the erosion intensifies, channelling more and more water away from the furthest point in the curtain where, at some stage, the water stops flowing altogether. The new gorge cuts its way back until the river encounters another east-west trending joint with its soft infill, and the whole process starts over again.

The Big Spill The Victoria Falls was created by a shift in river systems that began by geological upheavals in southern central Africa some 15 million years ago. Evidence suggests that prior to this, a very different river system existed, and that the upper and lower Zambezi Rivers were not linked at all. Victoria Falls did not exist. The upper Zambezi, together with the Mashi, Chobe and Okavango Rivers, flowed across the Kalahari into the palaeo-Limpopo River system.

The lower Zambezi, fed by the Kafue, Matetsi and Luangwa Rivers, had its own outlet into the Indian Ocean. Between 15 and 10 million years ago the Miocene warping upheavals created a ridge known as the Zimbabwe-Kalahari Axis. This effectively separated the Limpopo and Zambezi systems, creating a huge inland lake stretching from what is now the Okavango Delta to the Makgadikgadi Pans. At its height, this lake may have been larger than the 60,000km2 present-day Lake Victoria.

At this point the upper and lower Zambezi Rivers remained separate. Many scientists believe the linkage occured when the middle Zambezi eroded back into the ancient lake, creating a catastrophic flood that started a new process of river capture. The remains of the emptied lake are the hauntingly beautiful Makgadikgadi Pans.

The floodwaters carved the Batoka Gorge in the basalt plate that separated the upper Zambezi and Matetsi Rivers, eventually leading to the linkage of the upper and lower Zambezi Rivers. This shift in the watercourse led to the formation of the Victoria Falls sequence, which continues to play itself out in geological time.

Victoria Falls Hotels, Resorts and Safari Lodges on the Zimbabwean Side 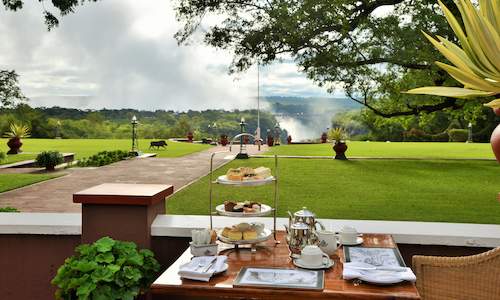 All these Victoria Falls hotels on the Zimbabwean side offer close proximity to Vic Falls and a range of activities including Victoria Falls...more

Victoria Falls Hotel Resorts and Safari Lodges on the Zambian Side 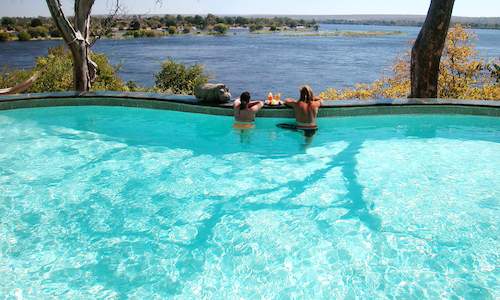 These Victoria Falls hotels and lodges are located on the Zambian side of Victoria Falls. Staying at a lodge on the mighty Zambezi River off...more
Creators of Unforgettable Memories in Africa.
©2022 Siyabona Africa (Pty)Ltd - All inclusive Holiday