The Geologic Future of Victoria Falls

The town of Victoria Falls at top of photo
This picture clearly shows the previous series of falls which occurred in the downstream gorges. Scientists have identified two fault lines (red and orange lines) above the present-day Falls, either of which may become the lip of the next phase of Victoria Falls at some point in the next 20 000 years.
Photo: Brett Hilton-BarberThe march of the waterfalls through the basalt continues today in a geological "slow-mo" that is almost beyond human perception. The Devil's Cataract is the "nick point" in the current Victoria Falls, being a good 10m lower than the lip of the Falls on the Eastern Cataract.

As more and more Zambezi water is channelled through this weak point, the faster the erosion of the basalt at this spot. Water is dragged away from the eastern side of the present Falls until, eventually, sometime in the not too distant future, the whole of the Zambezi will probably be channelled through the Devil's Cataract, cutting a deep north-south gorge and leaving the whole of the curtain, from that point westward towards the Zambian side, a high, dry gorge wall.

The likelihood that another huge curtain fall will form is high, since just a few metres west of the Devil's Cataract is another soft east-west trending joint which can be seen as a fissure in the wall almost opposite the David Livingstone statue across the boiling waters.

If the river fails to sweep this soft infill out and form a new curtain fall that angles away from the present line of the Falls, then the most likely next Victoria Falls will almost certainly occur just a short distance upstream where an almost perfect east-west trending joint of soft material is present, and this will create a new falls that is parallel to the present one.

Using the fastest forming hypotheses, we could see an entirely new Victoria Falls being formed within the next 20 000 years, with the existing lip of the Falls becoming the "new" rainforest facing the new Falls.

This geological process will continue until the Falls retreat all the way to the river bend near Palm Island about 3km above their present line.As they erode their way backwards out of the basalt and into the sandveld, the Falls will become a series of high rapids - not too dissimilar to Ngonye Falls.

The widest falling curtain of water in the world will?no longer exist, and all that will?remain of the Victoria Falls phenomenon will be a series of deep gorges through which the great Zambezi will relentlessly push itself towards the Indian OceanBrett Hilton-Barber and Lee R. Berger. Copyright © 2010 Prime Origins. 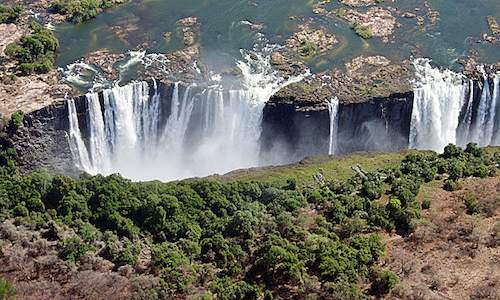 The Victoria Falls have been billed as the greatest falling curtain of water on the planet, making it one of the seven natural wonders of th...more
Creators of Unforgettable Memories in Africa.
©2022 Siyabona Africa (Pty)Ltd - All inclusive Holiday