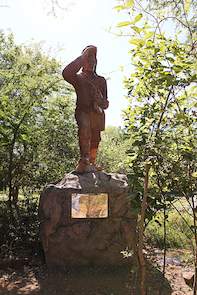 Born in Blantyre in Scotland to a poor but devout Christian family, he trained as a medical doctor in Glasgow before joining the London Missionary Society. Through this organisation, he met the South African-based missionary Robert Moffat who inspired him to come to Africa.

He arrived in Cape Town in 1840 and joined Moffat's mission at Kuruman in the Kalahari Desert. He married Moffat's daughter Mary and, driven by his dual passion to spread the Christian faith and to explore the unknown, travelled extensively through Africa. He was an ardent campaigner against slavery and received many accolades, degrees and awards, including the Freedom of the City of London.

His anti-slavery position earned him the trust of many communities he met in Africa. Although Livingstone may not have been the first European to see Victoria Falls, when he reached them in 1855, he certainly was the first to bring them to the attention of the Western world.

Historians believe that, despite the beauty of the Falls, they were an initial disappointment to him, and his vibrant Victorian prose owed more to the advice of his publishers than to what appeared in his actual diary entries of the time.

He maintained a belief that the Zambezi was "God's highway" to open up central Africa but was defeated in his endeavours to open it up by the Cabora Bassa Rapids, which he only encountered during his second major expedition up the river a few years later.

Livingstone's famous meeting with the American reporter Henry Stanley took place on the shores of what was then Lake Tanganyika in 1871, when the American greeted him with the immortal words, "Dr Livingstone, I presume".

Livingstone died two years later in northern Zambia. He was found kneeling in prayer by his bedside.

Bury My Heart in Africa

His porters removed his heart and buried it under a tree in the soils of Africa. They then embalmed his body and carried it 2400 kilometres to the Indian Ocean town of Dar-es-Salaam from where it was shipped back to England. Livingstone was laid to rest at Westminster Abbey in 1874.Read about Livingstones Expedition